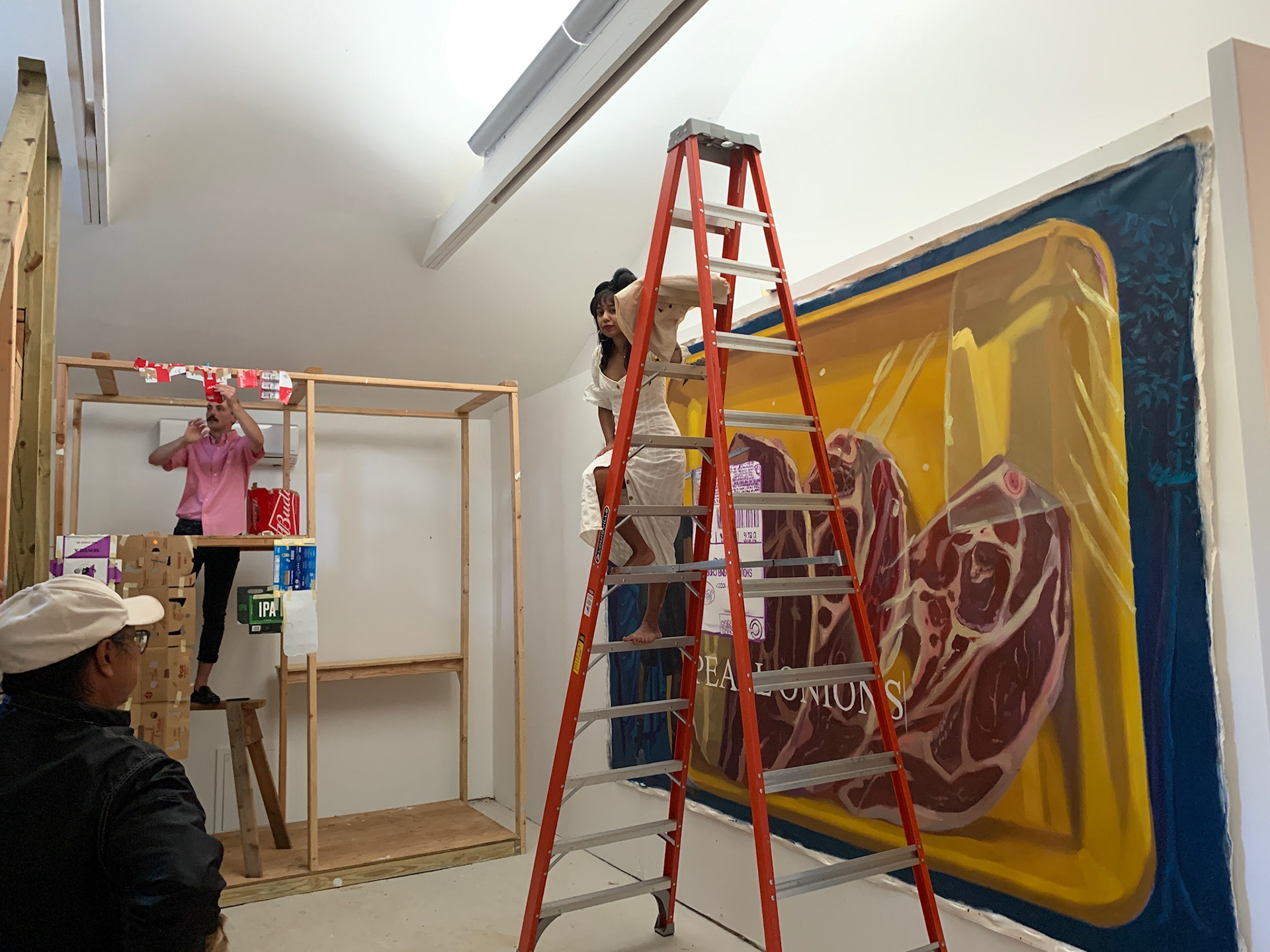 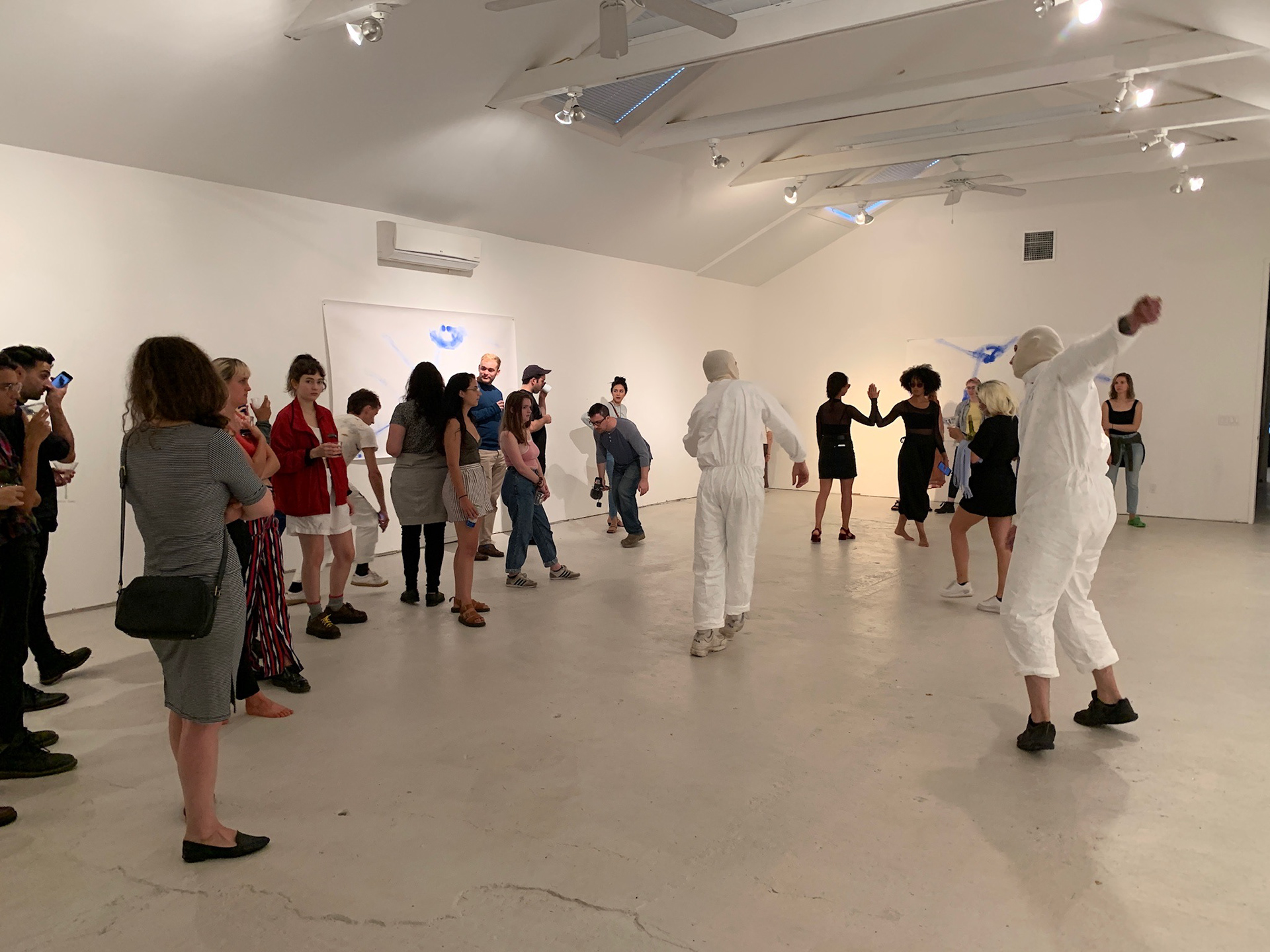 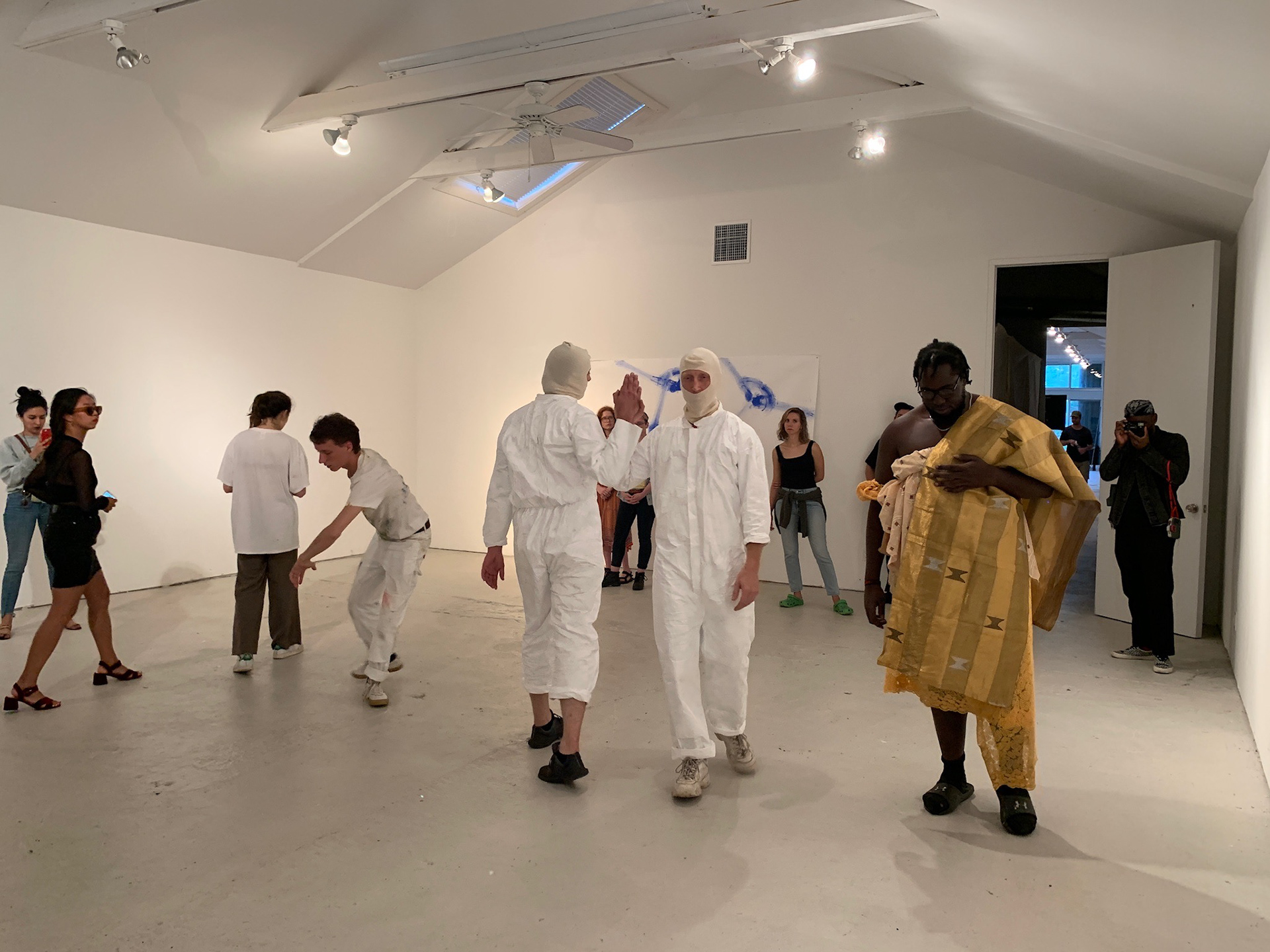 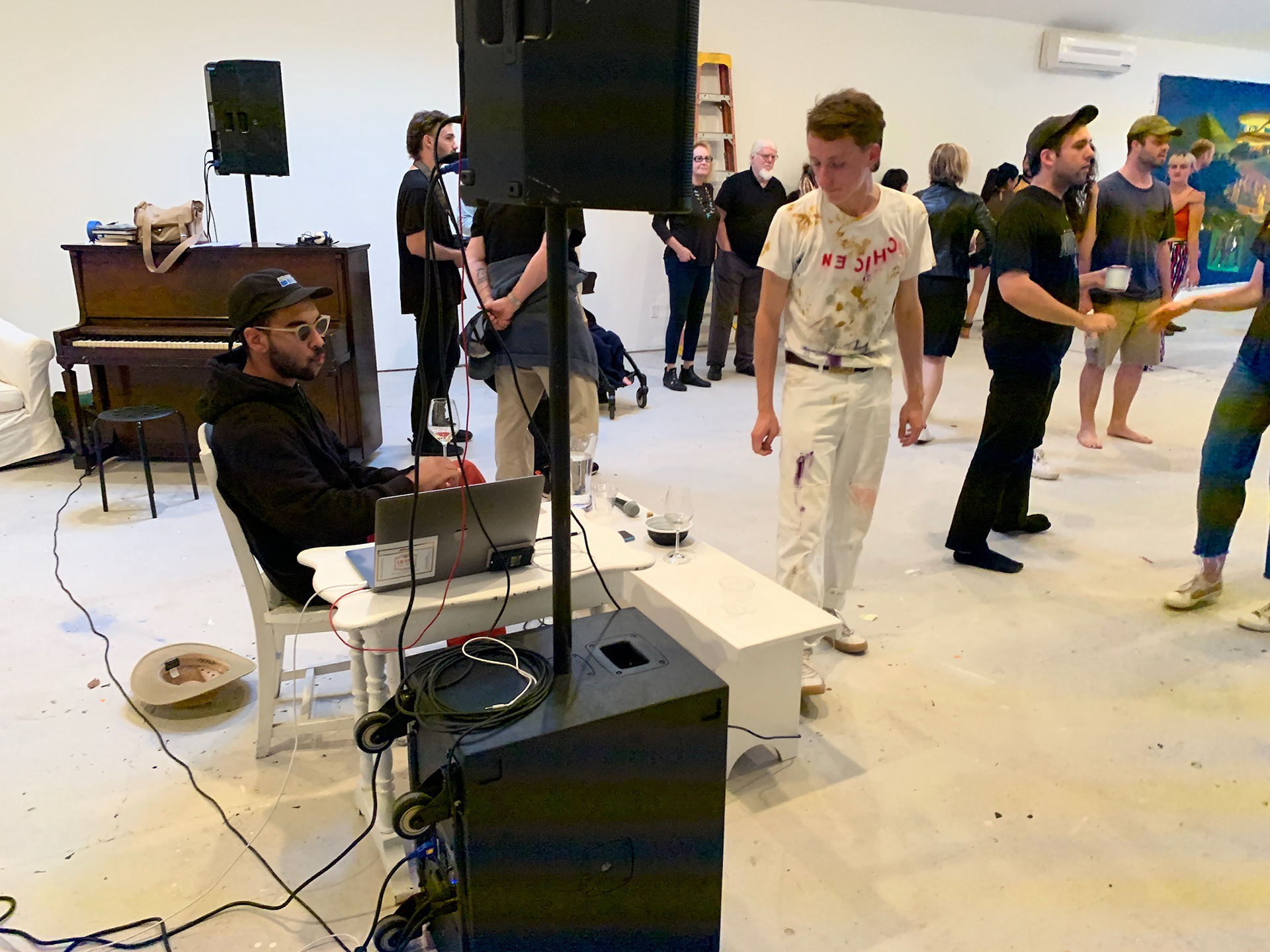 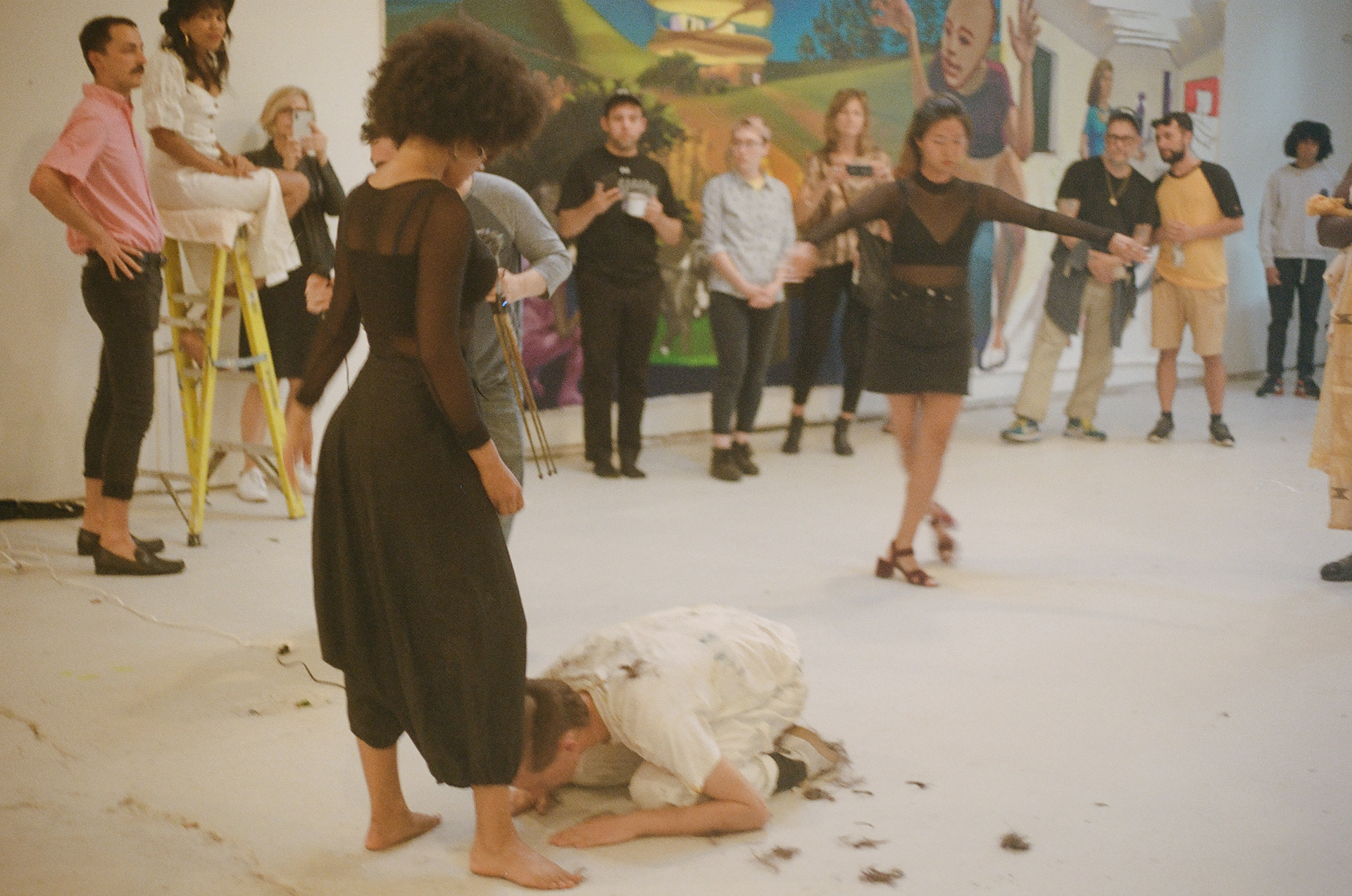 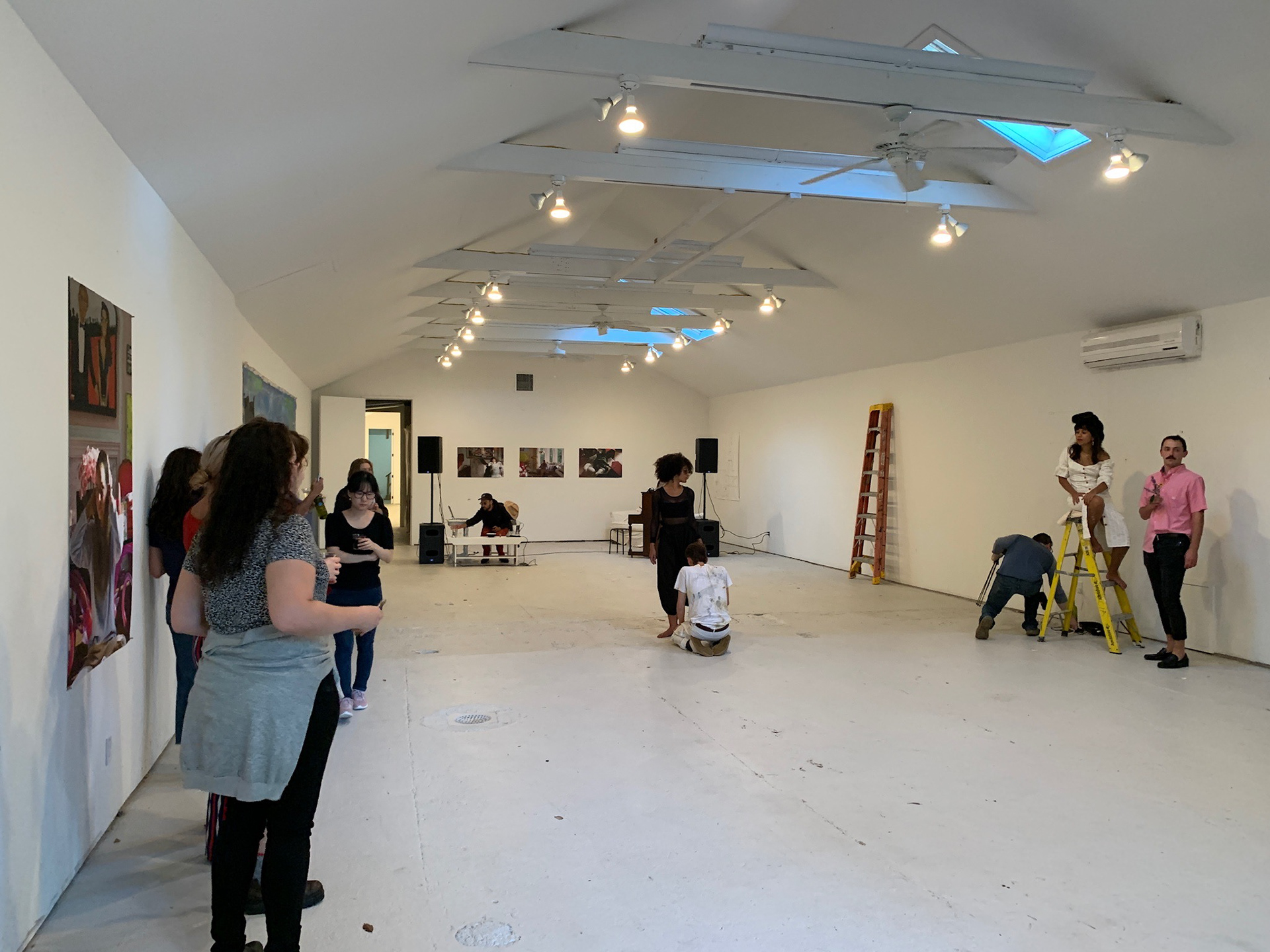 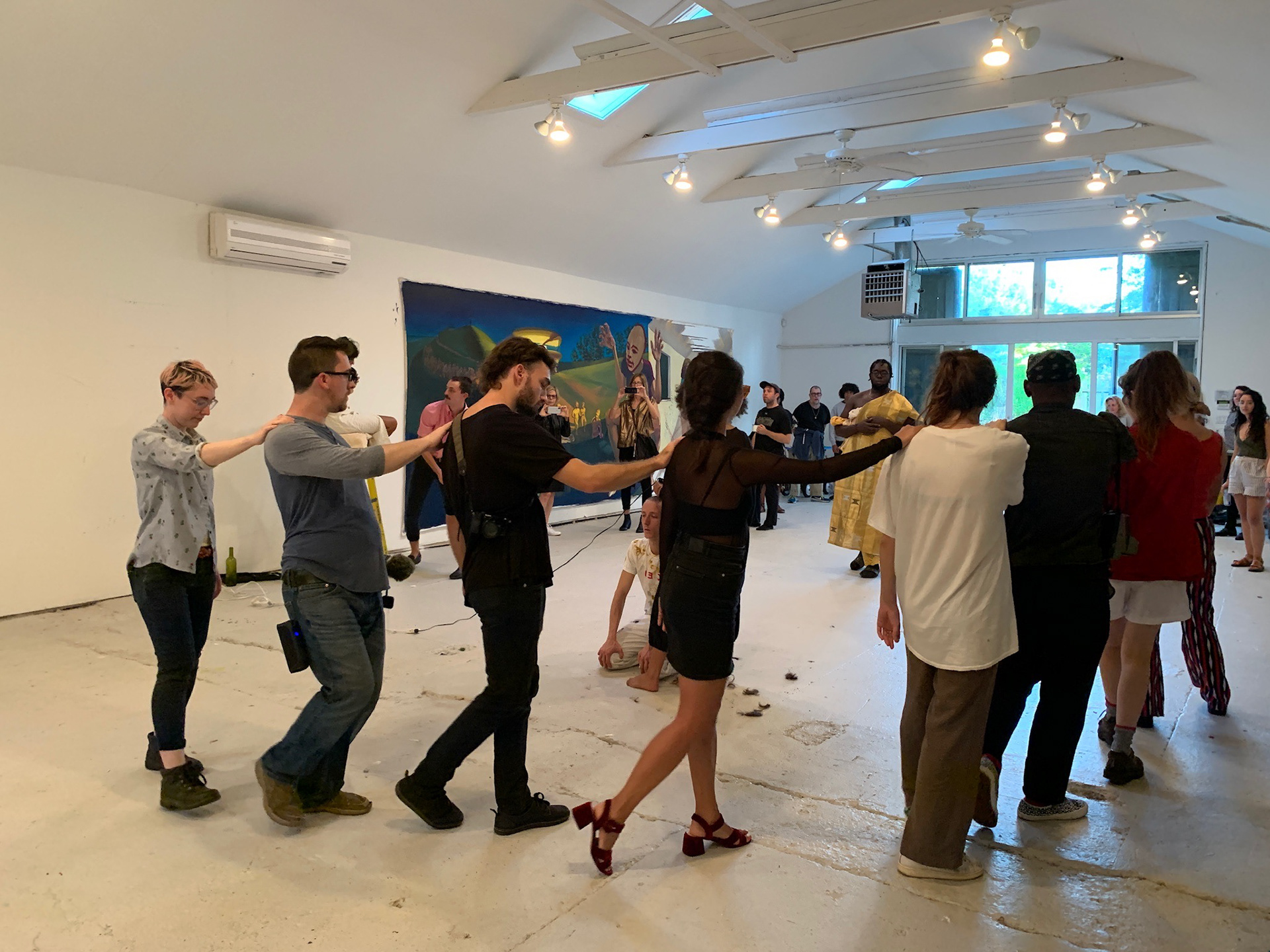 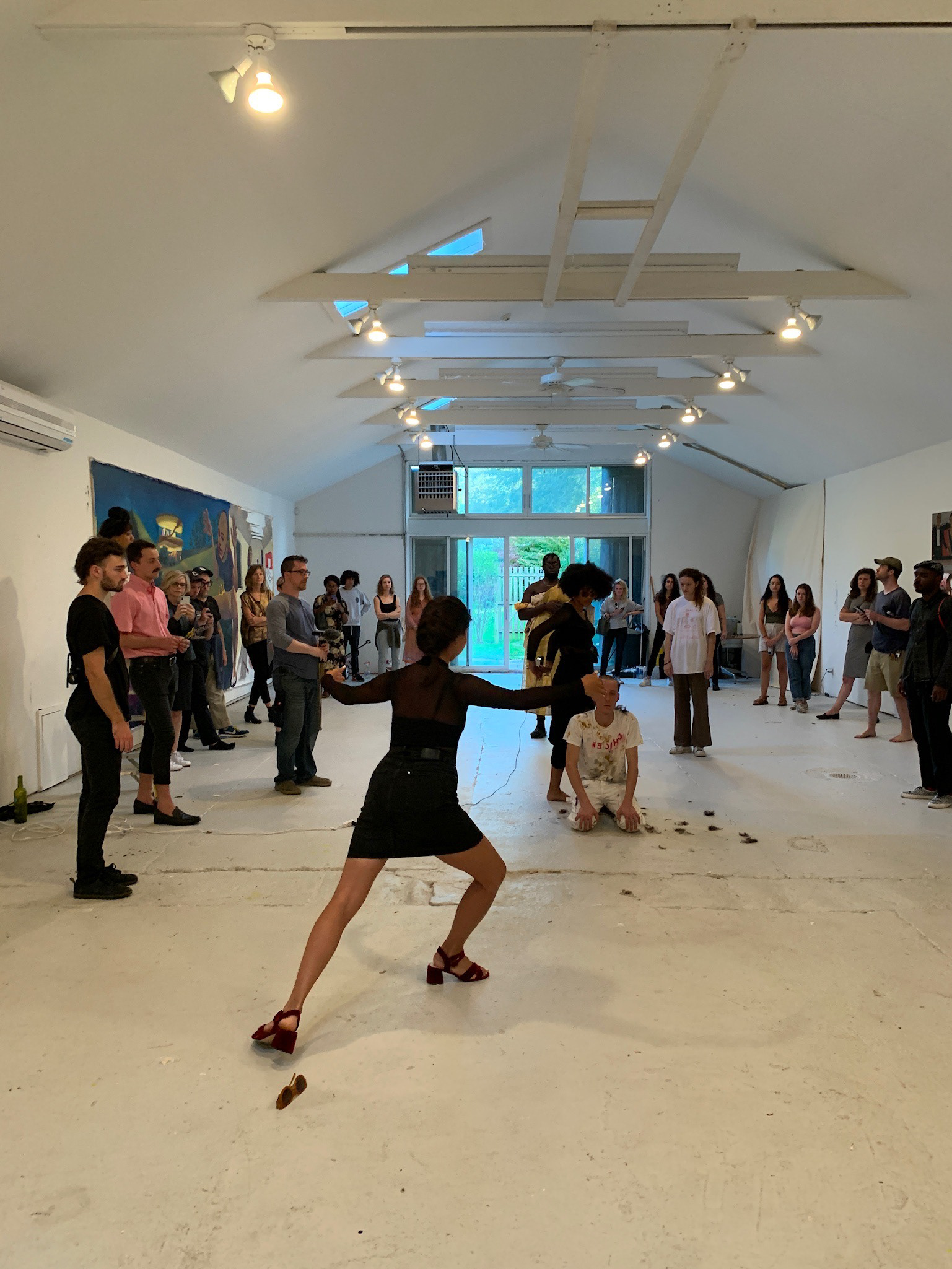 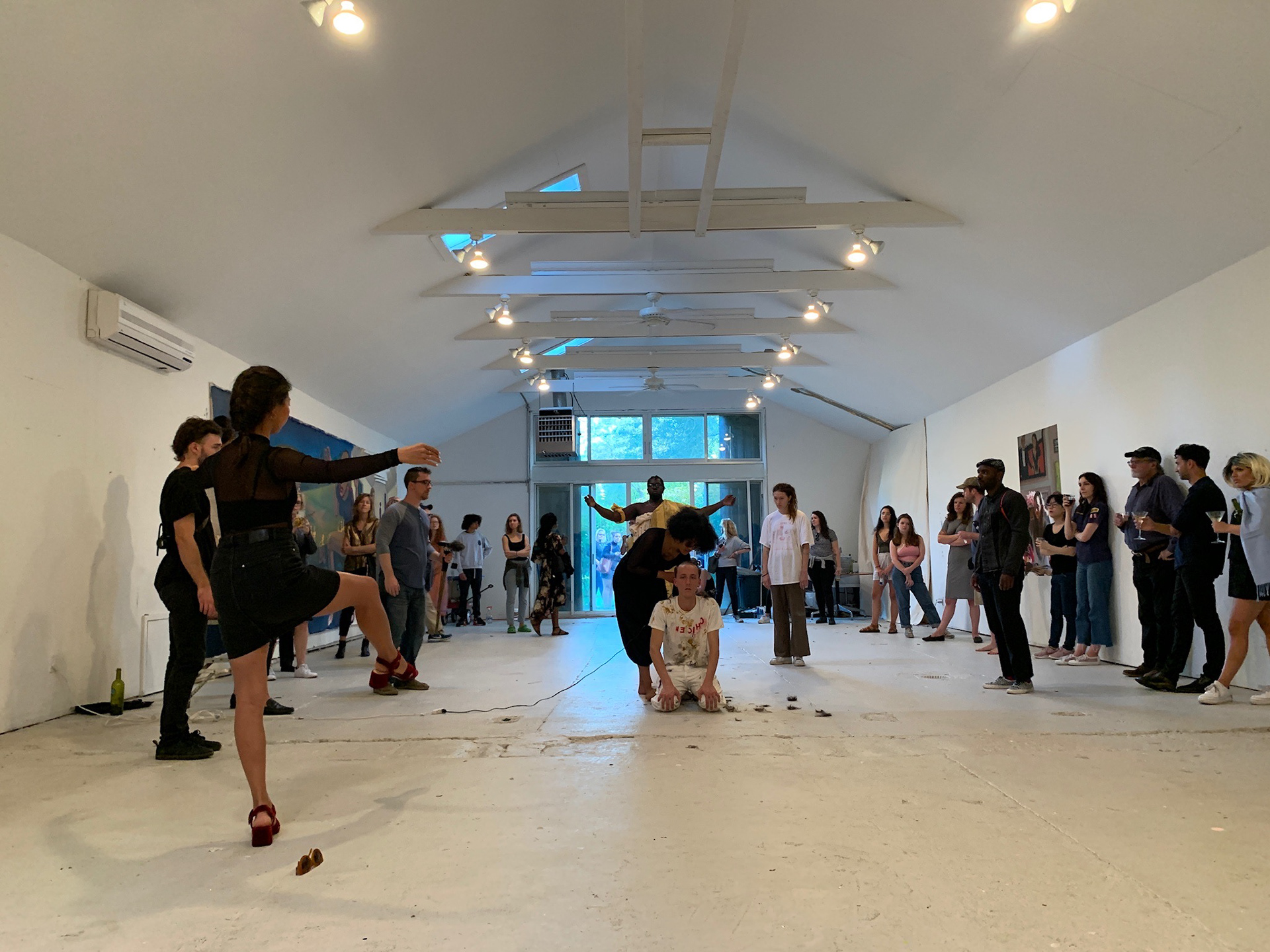 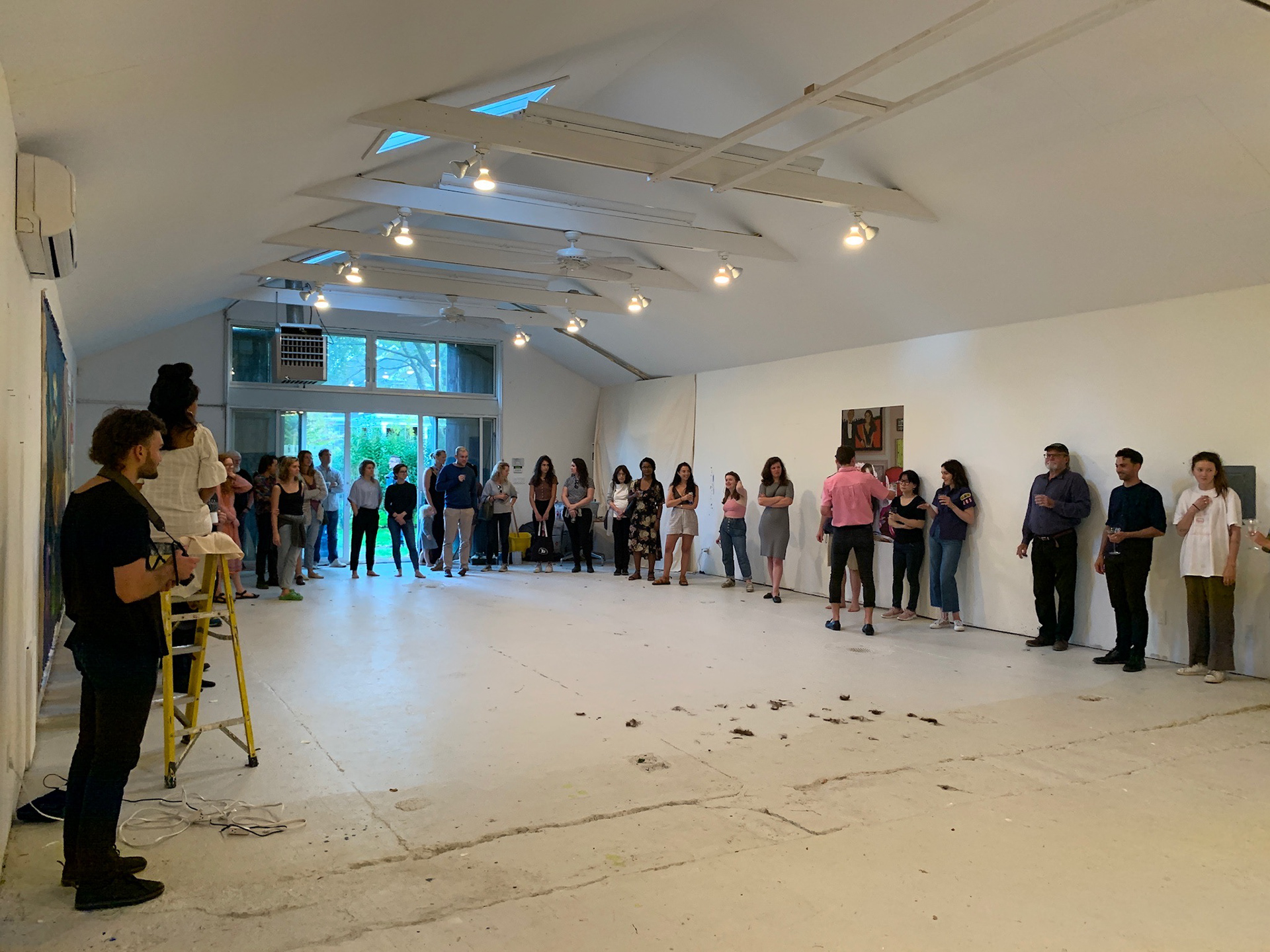 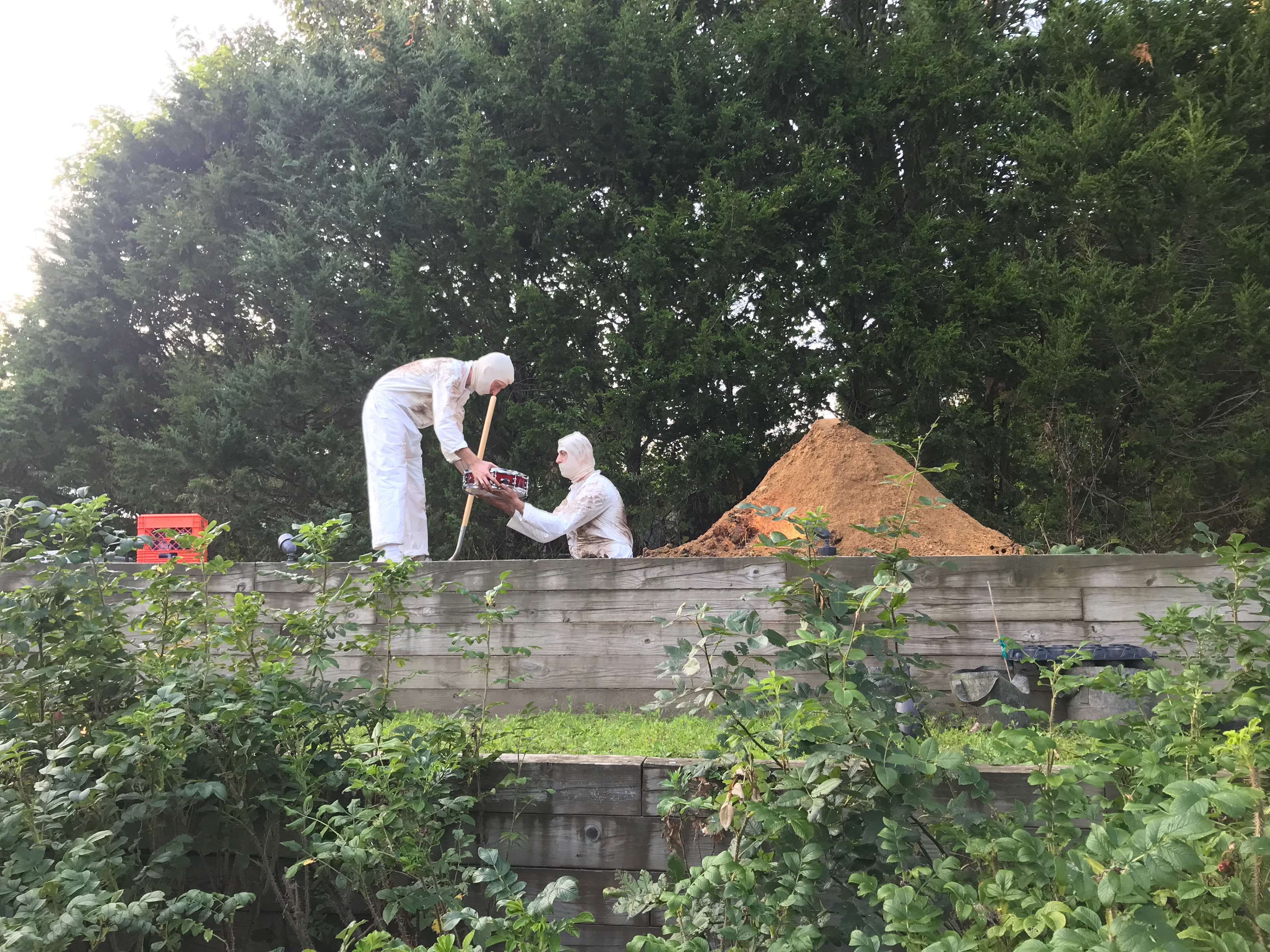 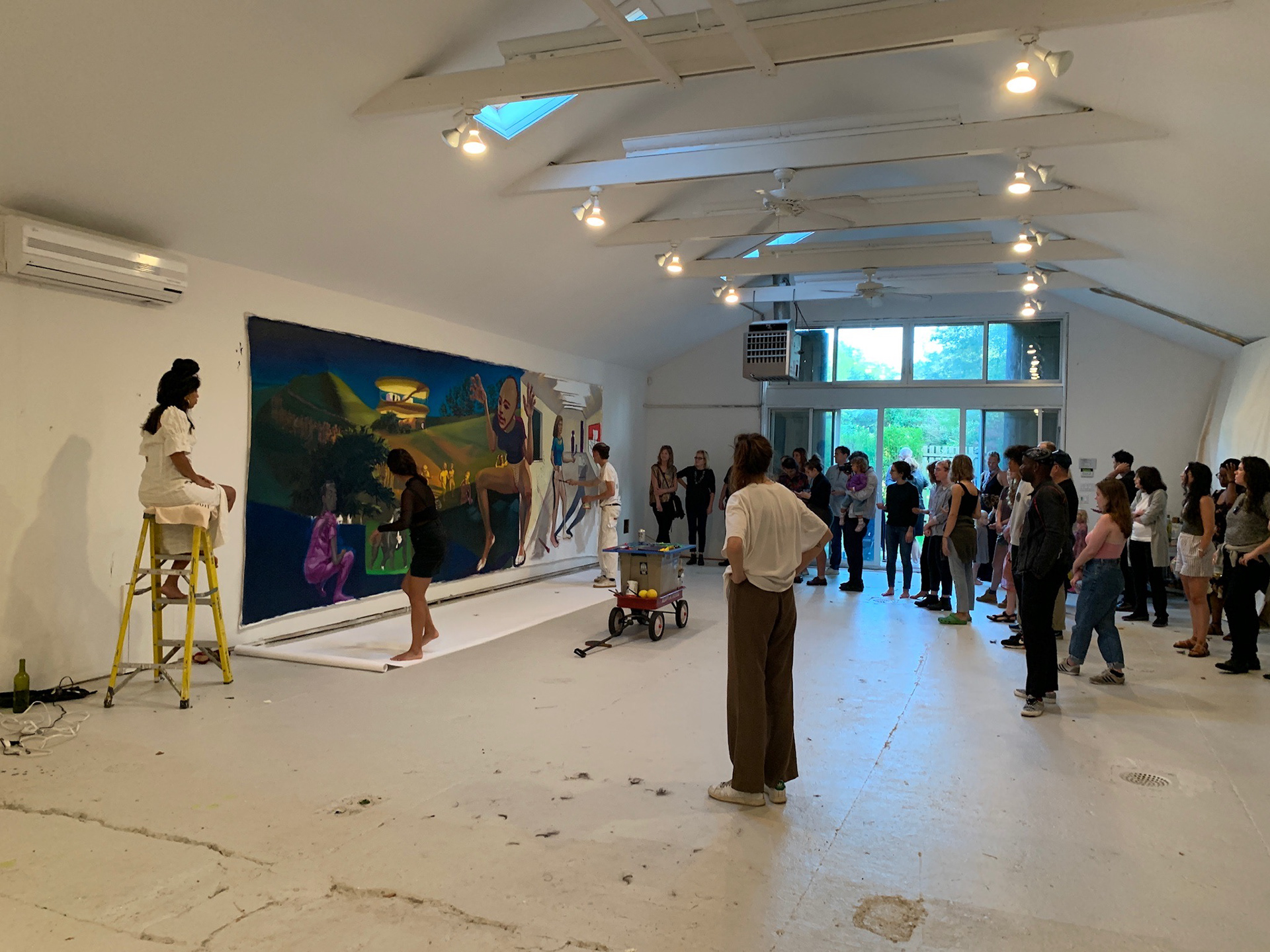 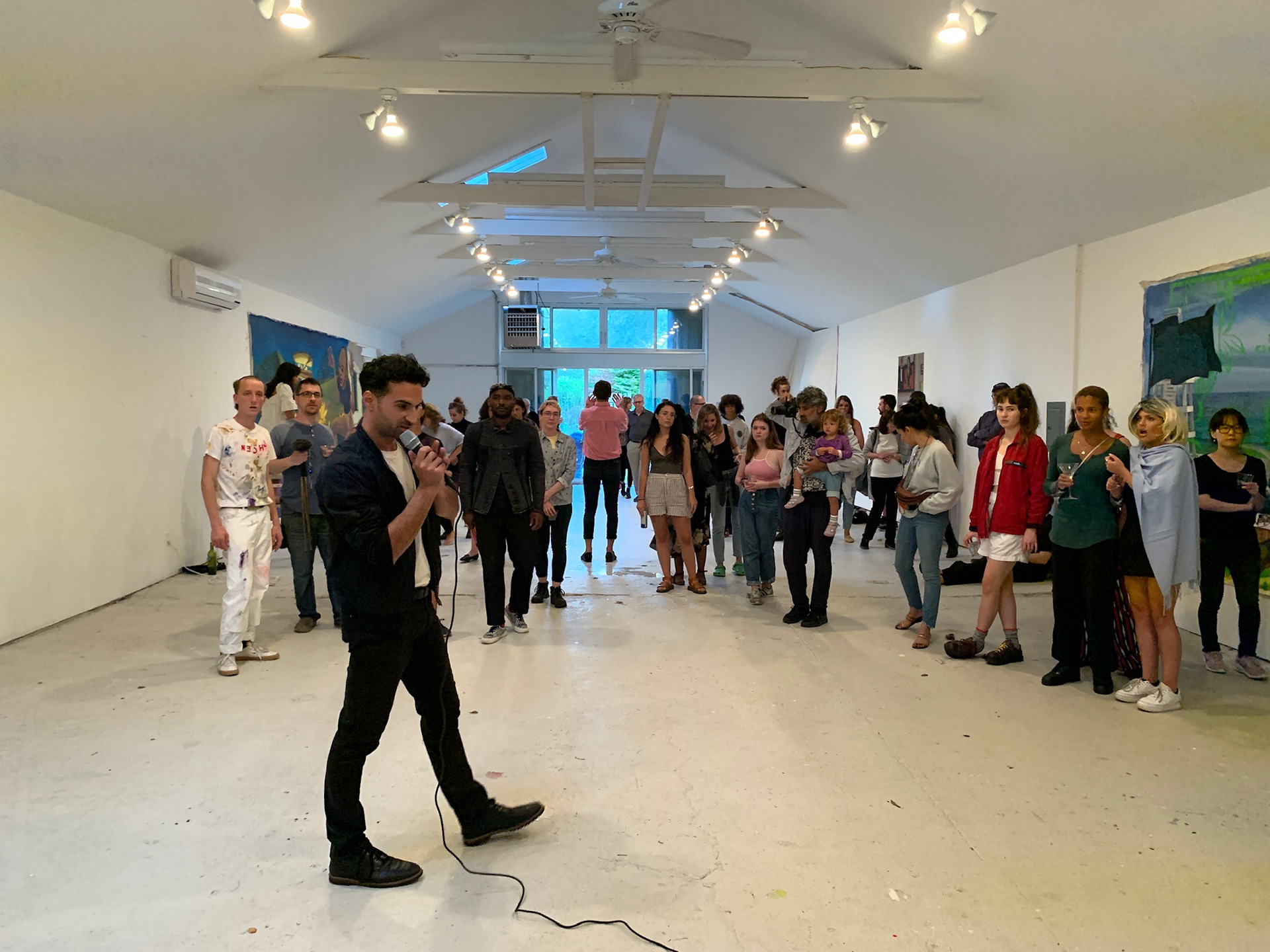 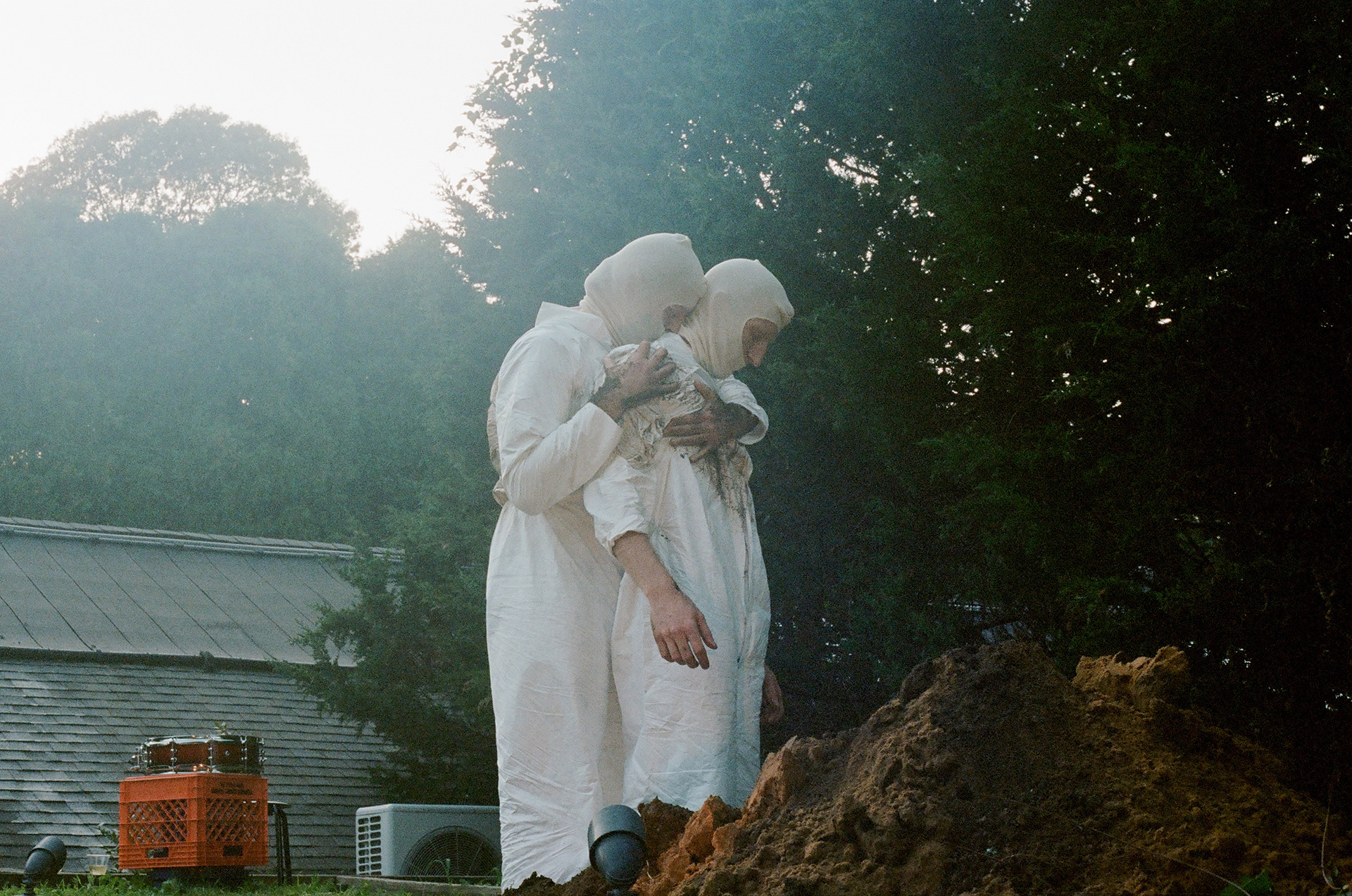 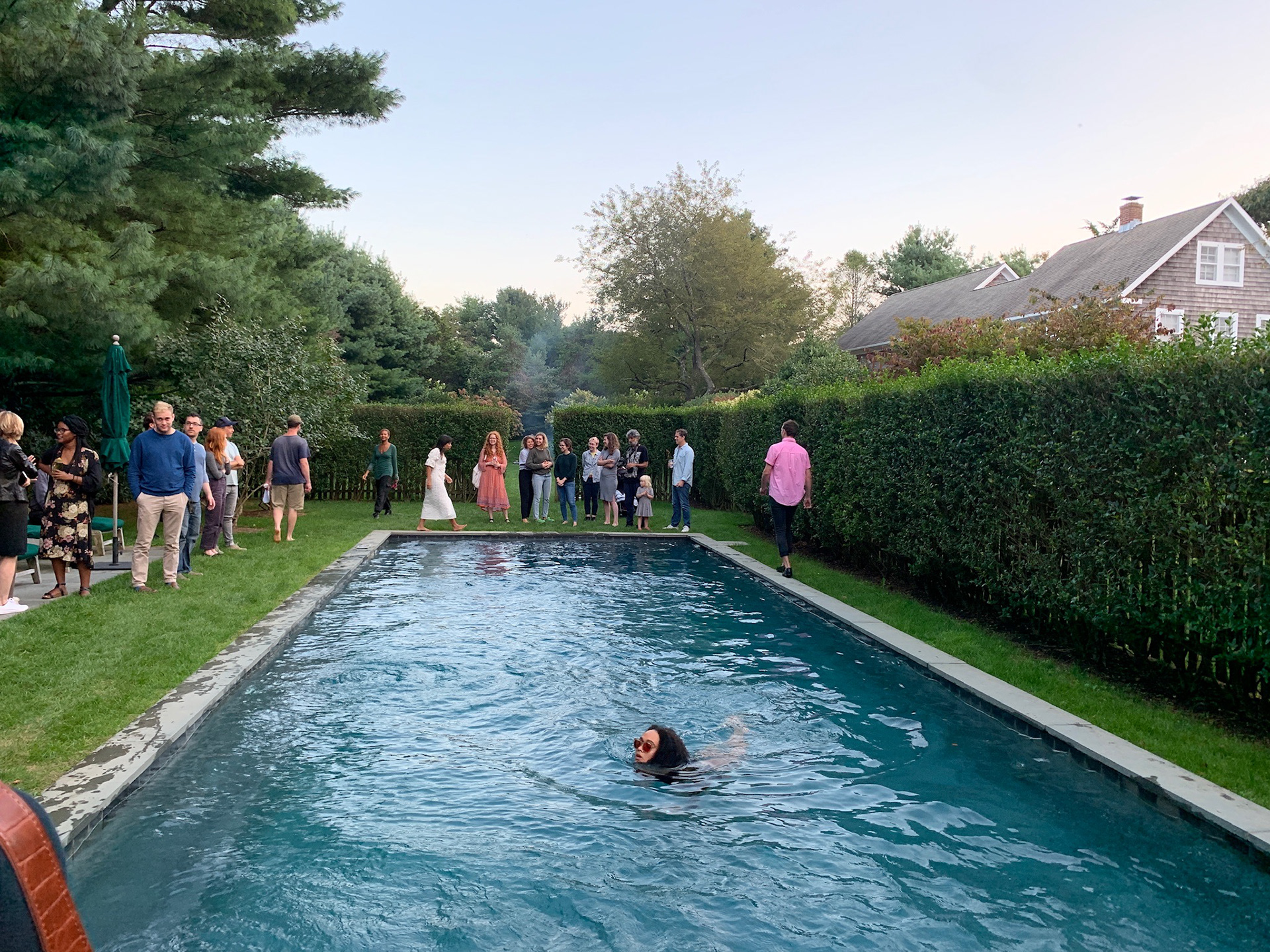 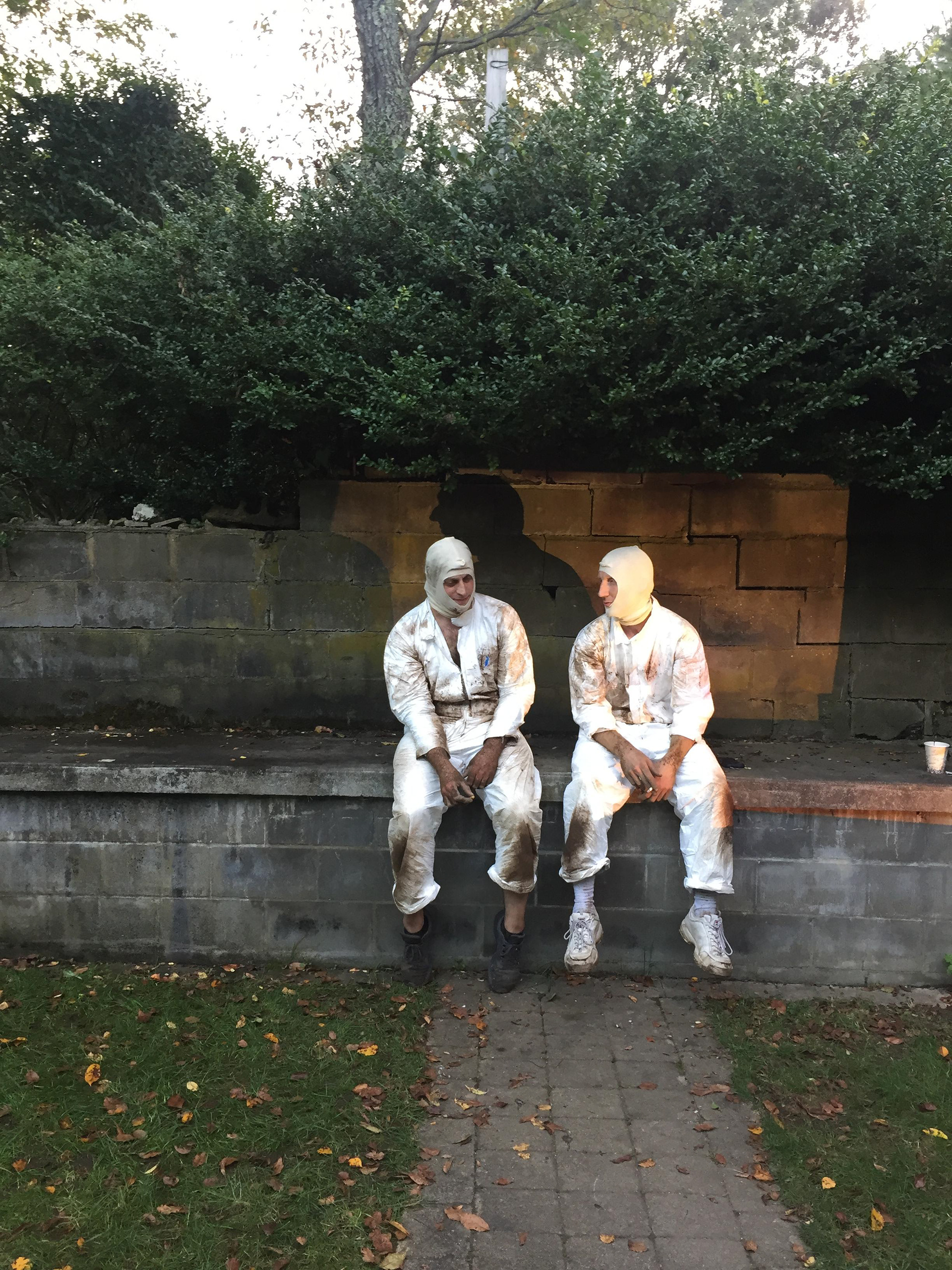 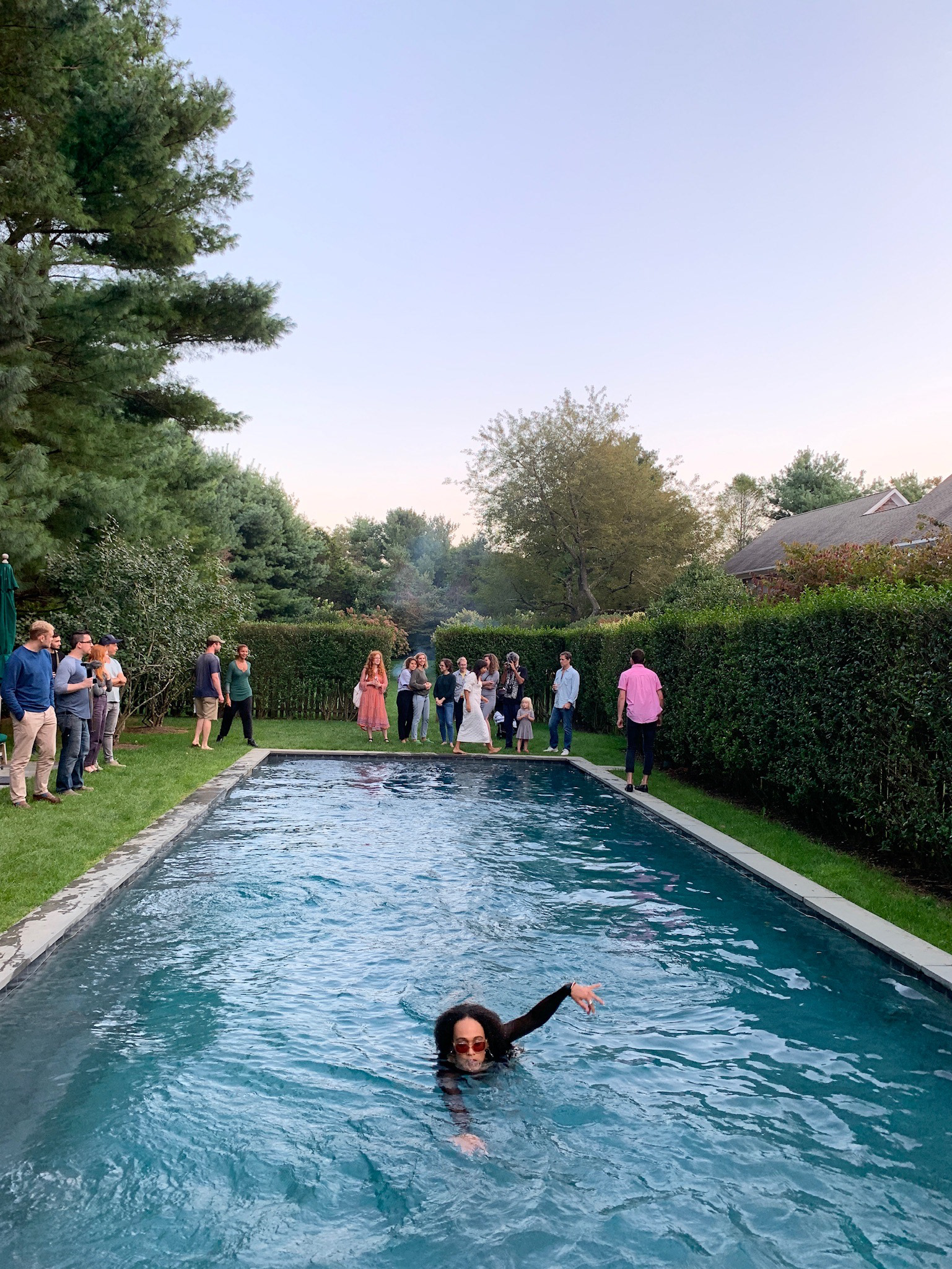 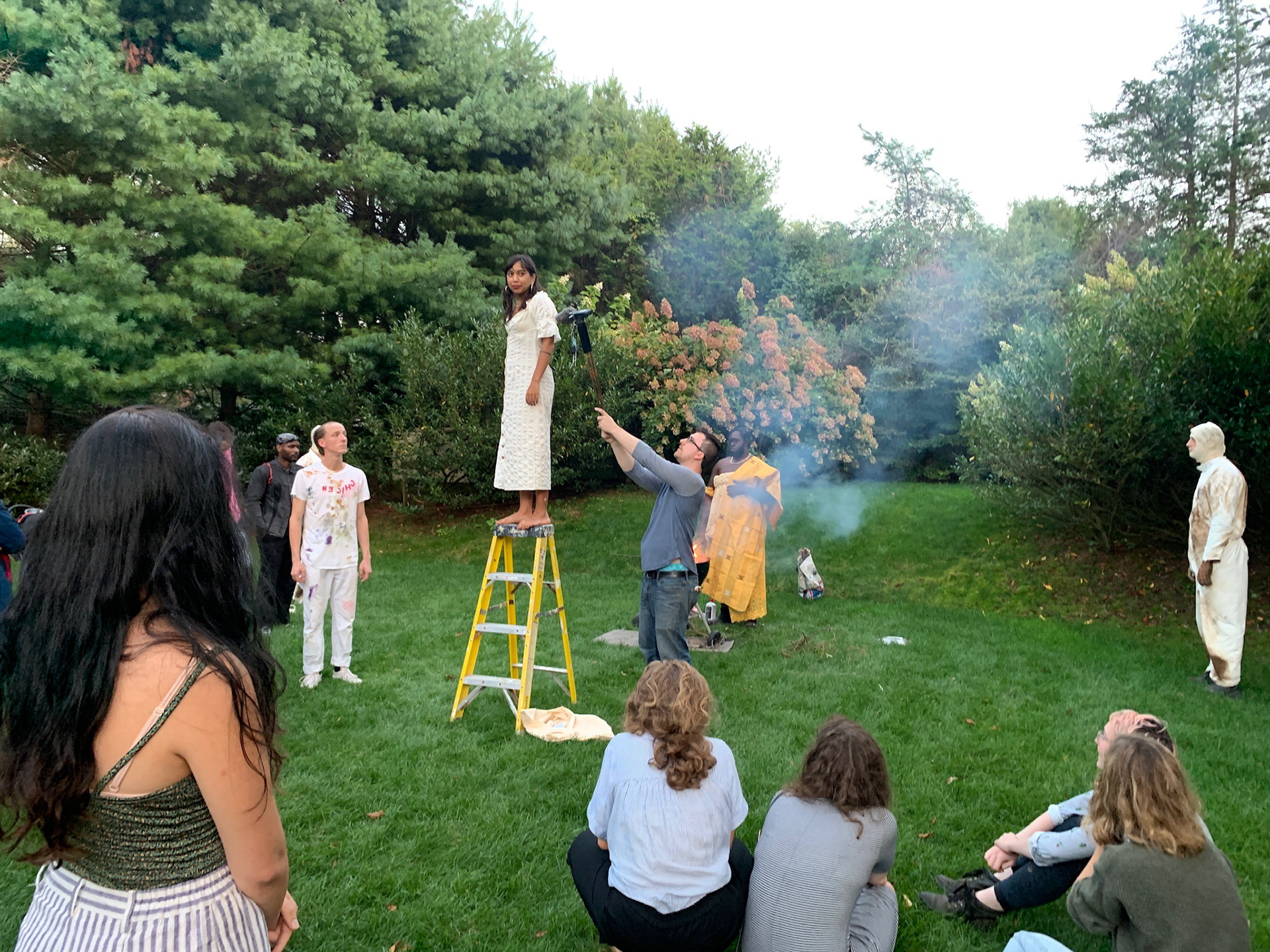 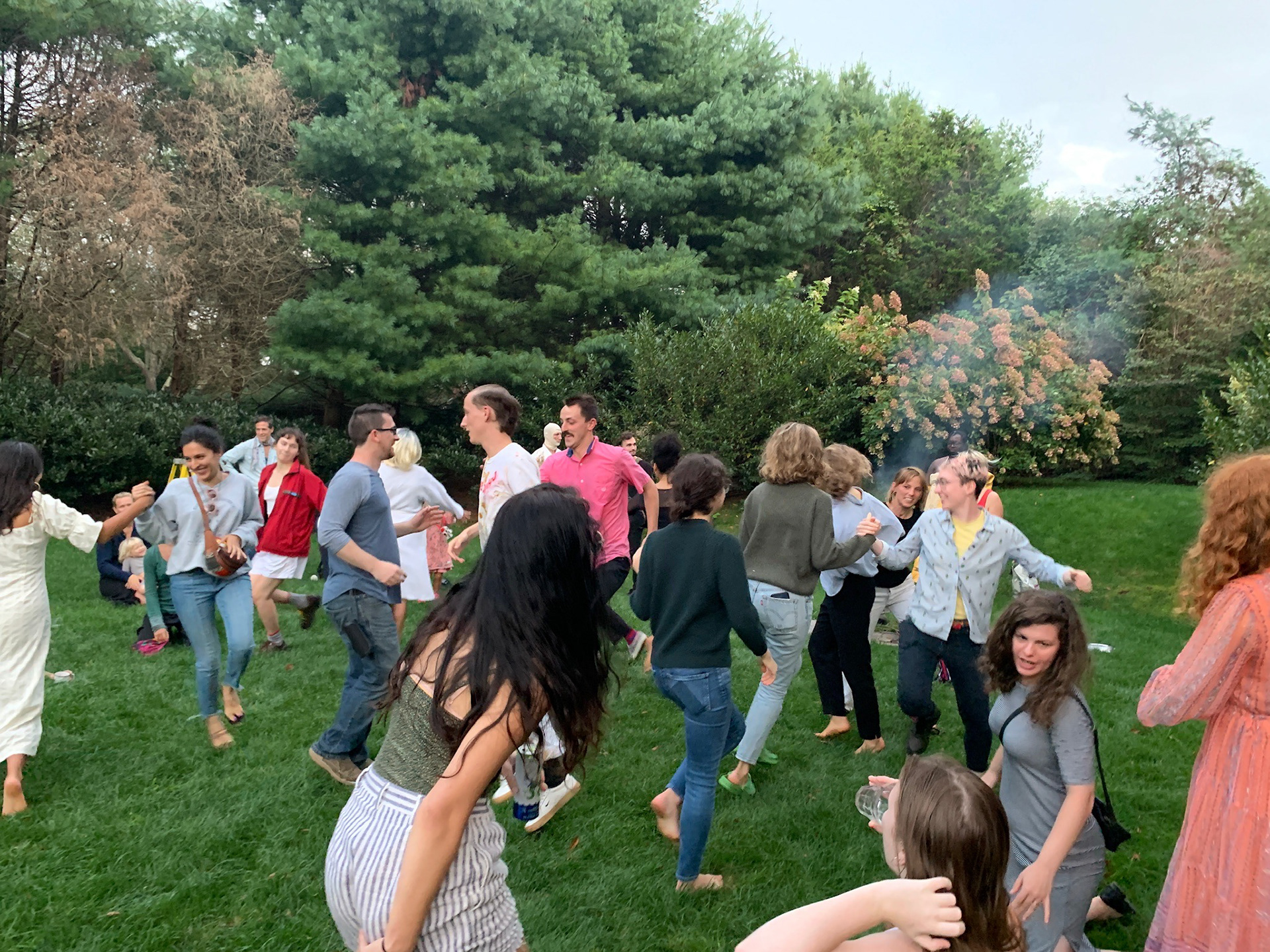 Nocturna was a collaborative "Play" that took place in Amagansett, New York on September 28th, 2019.
Thinking about child’s play, we staged our “play” by reacting to and interpreting each other’s work, scaling up a game of pretend into a mode of aesthetic production. Essentially, the play was “written,” not through writing alone, but through poetry, painting, sound, performance, choreography, sculpture, cooking, and, above all, an extended conversation between artists concerning the project itself and the place where it was performed.
Attendees saw paintings, heard the poetry and music, witnessed the event, and some gave their own responses, driving the “play” past what could-have-been designed. Collaboratively, we danced along the connections between each element of the piece, tracing the conversations from which it arose. Like these conversations, the “play” was dissonant and experimental, going past the point where we could know where or what it was: where we could locate ourselves. It was, at times, out of place with itself, and, at other times, it was harmonious as we spoke over and with each other.
Miming conversation, the event constructed, signified, an image of a place. It appeared as if something was happening, something which was supposed to happen, and which should have happened. This event, an experiment in place-making through conversation, pretend, artistic work, and experimentation itself — drew on tropes given to our specific cultural inheritances. The “play” plays with and in Americana, Pop, History, Myth, and the Hamptons, examining the given-ness of our individual “Americana(s)”. Constructed of our several American Identities through collision, the “play” identified these as constructions both specific and not (wholly/holy) knowable. And, like the image of understanding we walk away with from our daily conversations over coffee, the limit of this apparition is defined by the individuals at the table, their attitude, their perspective, their degree of agreement, and their capacity for dissonance. In short, these conversations are created from and out of the conversationalists’ subjectivities. It was specific to us, those who were there, and it only spoke to them. Because of this fact, before it happened, before we even knew what the “play” would be, before we arrived, brought what we had and made something with it, my question was: I wonder who will come… to play? to talk. Who is able to come? To this place on the Hamptons…​​​​​​​
Performance photos and video credited to Isabelle Hogenkamp, Ashby Marie Bland, David Lenz, Erin Elise Holland, and Patrick Bayly.
Spirits (Dylan Languell and Douglas Reiger) dig pit to bury a snare drum on a terrace overlooking the estate.
Nocturna (Eleanor Kipping), our fictional goddess, sacrificially shaving a Pollock-esque balding pattern into the Painter (Patrick Bayly) as an offering, while the Oracle (Jai Hamid Bashir) looks on from her ladder, a troupe of dancers led by the Priestess (Beau Rhee) circles, and Osiris (Farouk Oni) looks on. Music by Amr Sultan.
Overpainting Blue Dark after the sacrificial head shaving into a Pollock-esque balding pattern, with Beau Rhee. 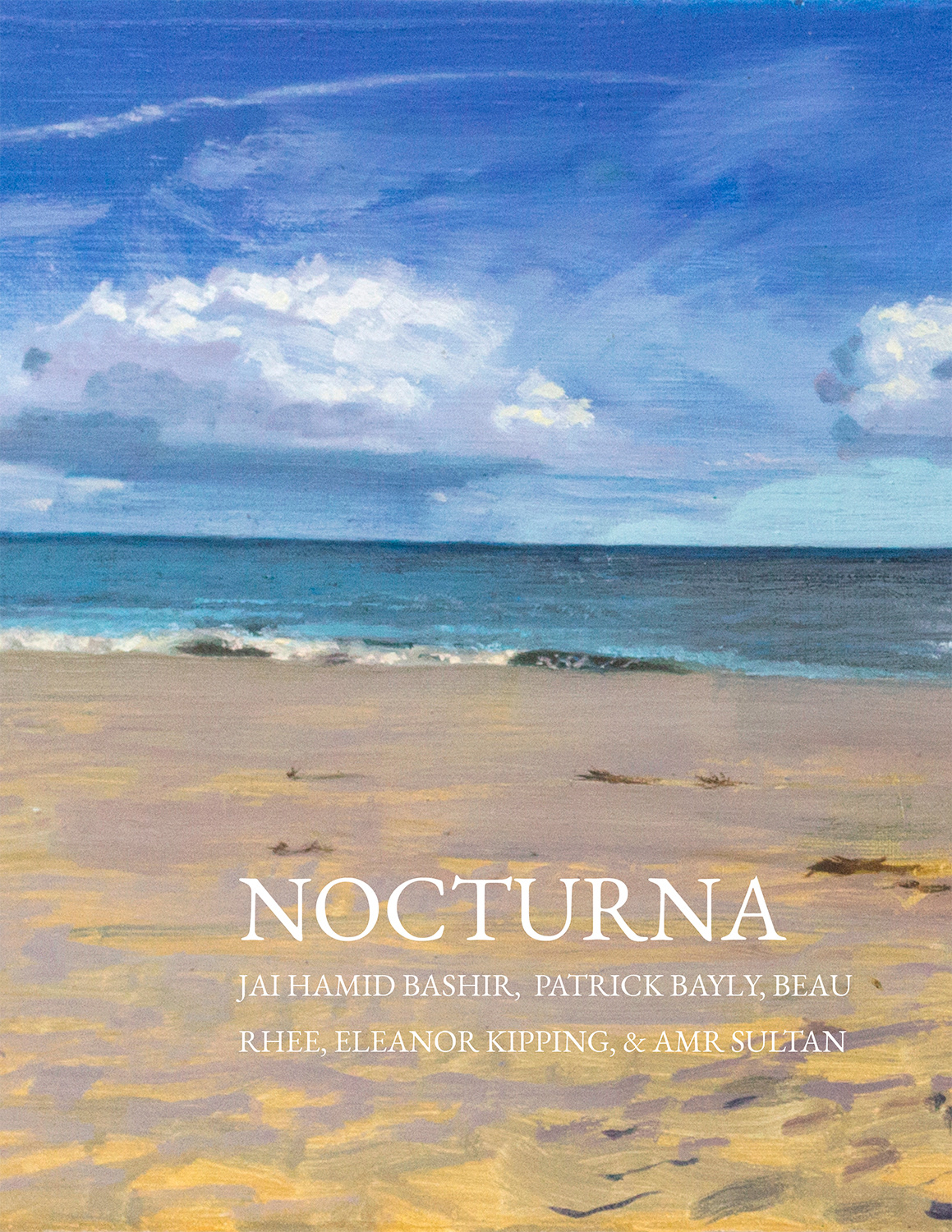 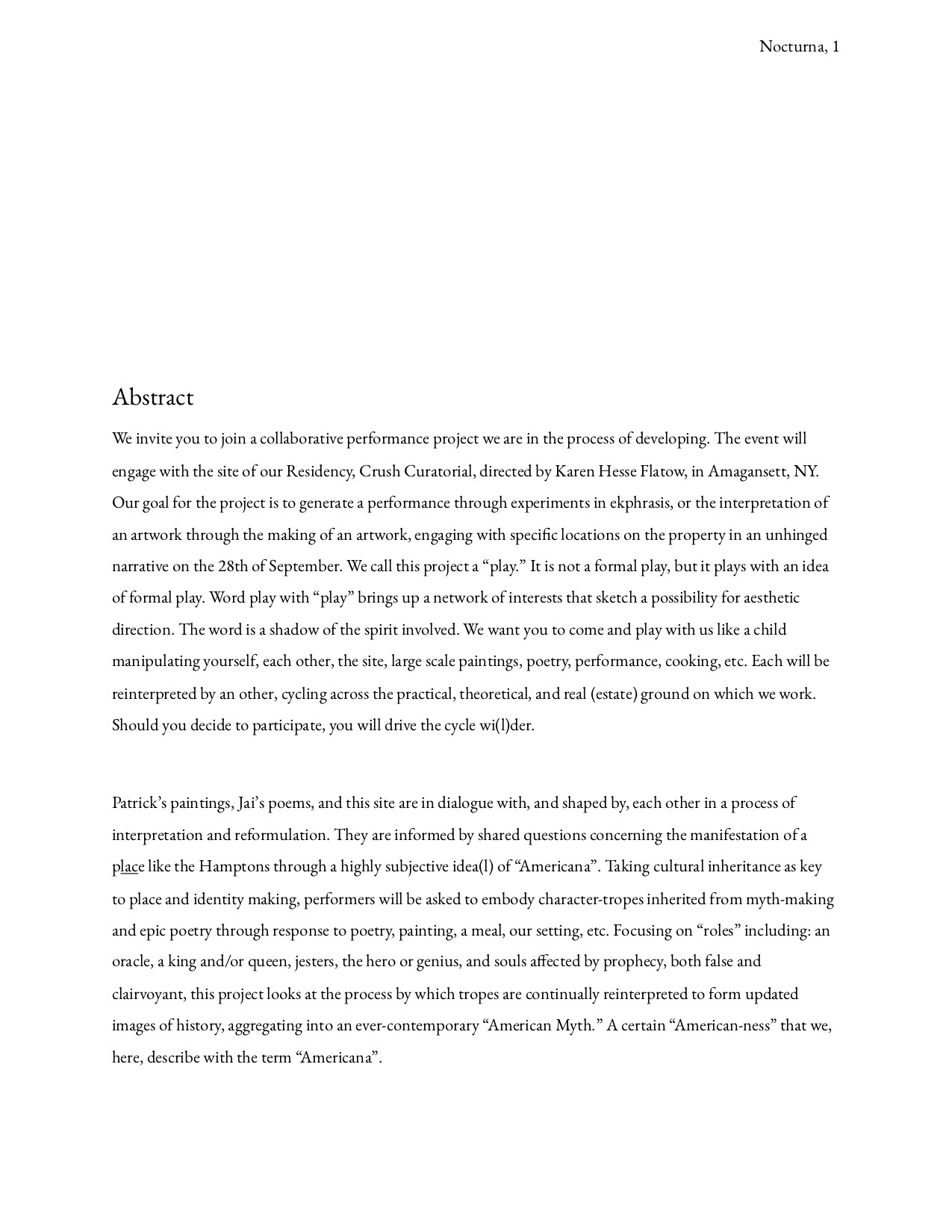 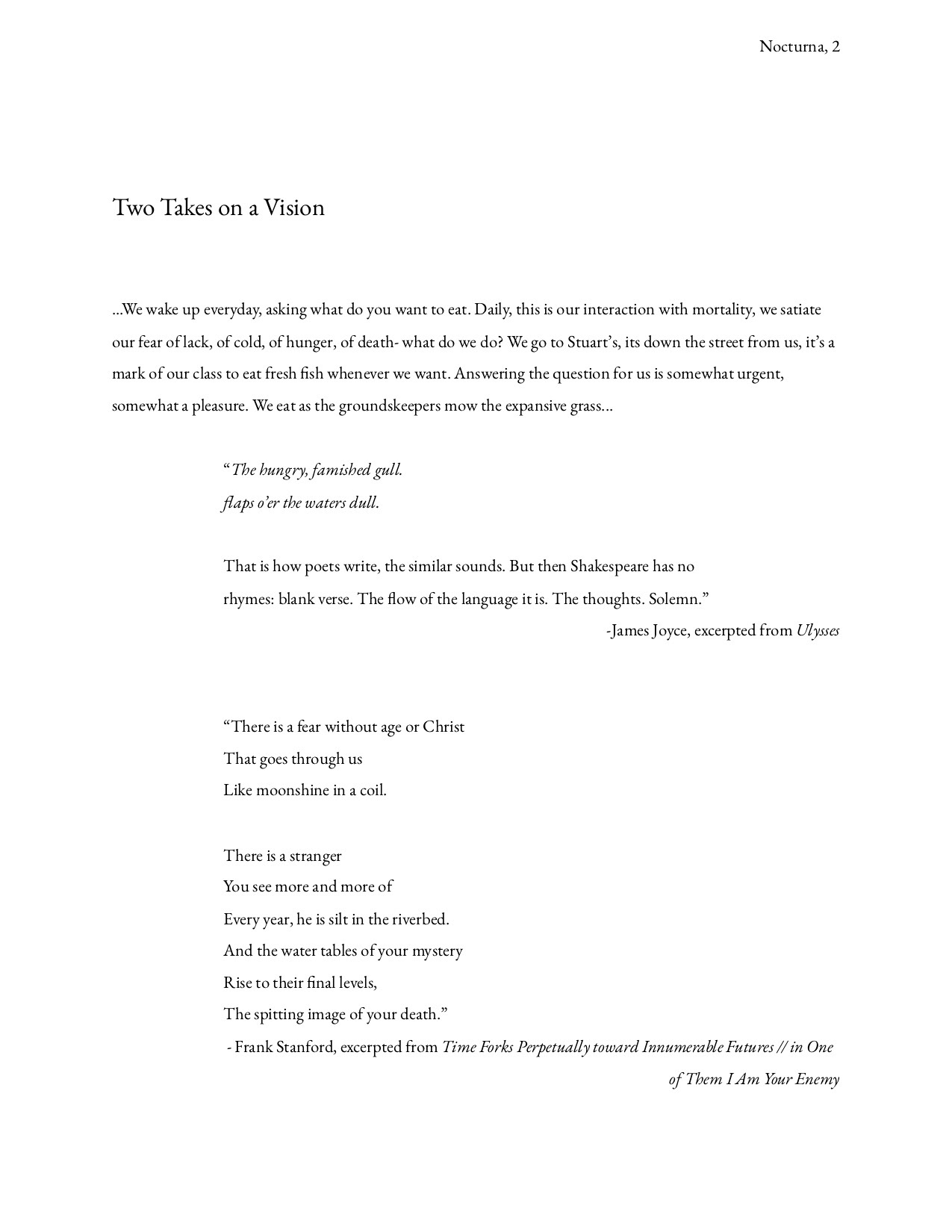 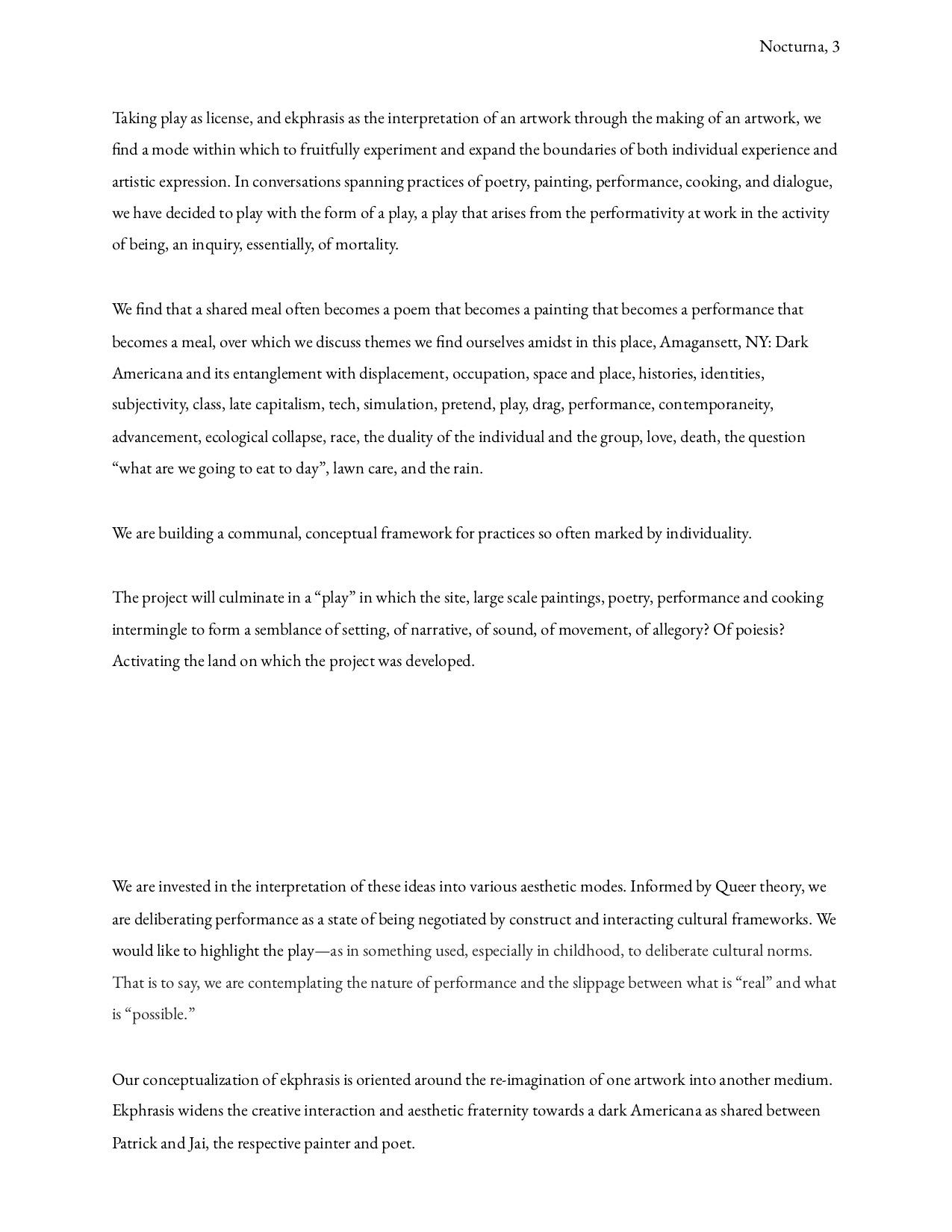 Excerpts from the invitation sent to collaborators, containing previews of the following paintings and a manuscript of poetry.
Nocturna, 2019, Jai Hamid Bashir's titular poem of that manuscript and of the event itself, is set to be published in the January/February 2020 issue of The American Poetry Review. A link to that site will be made as soon as it is available.

Blue Dark. WIP photograph. Summer 2019. oil on canvas, unstretched. 96" x 264"
2nd/3 large scale paintings created as part of the "writing" of the play. Blue Dark would go on to be overpainted during the course of the event.

Pearl Onions. Summer 2019. oil on canvas, unstretched. 96" x 149"
3rd/3 large scale paintings created as part of the "writing" of the "play". Osiris burnt an offering of similar lamb chops during the denouement of the event. The play references ritual conflated with contemporary consumption, and the distance between many metropolitan Americans and their resources. It makes use of overlay and and collage, in formal and procedural repetition of the collisions through which the "play" was constructed.

Posing with a self portrait in Bluedark, after overpainting during the performance.